The Scotch Malt Whisky Society won “Best In Show,” “Best Scotch,” and a “Double-Gold” at the 17th annual San Francisco Spirits Competition for an appropriately named release: “We Arrived!”

In addition, six other SMWS expressions were awarded “Double-Gold” medals—an unprecedented feat in one of the spirits industry’s most respected competitions.

“We Arrived!” is an Islay whisky aged for 18 years and distilled in 1998 in an ex-bourbon hogshead barrel. SMWS released only 227 bottles (priced at $215) and finding one today may require the aid of Scotland Yard. 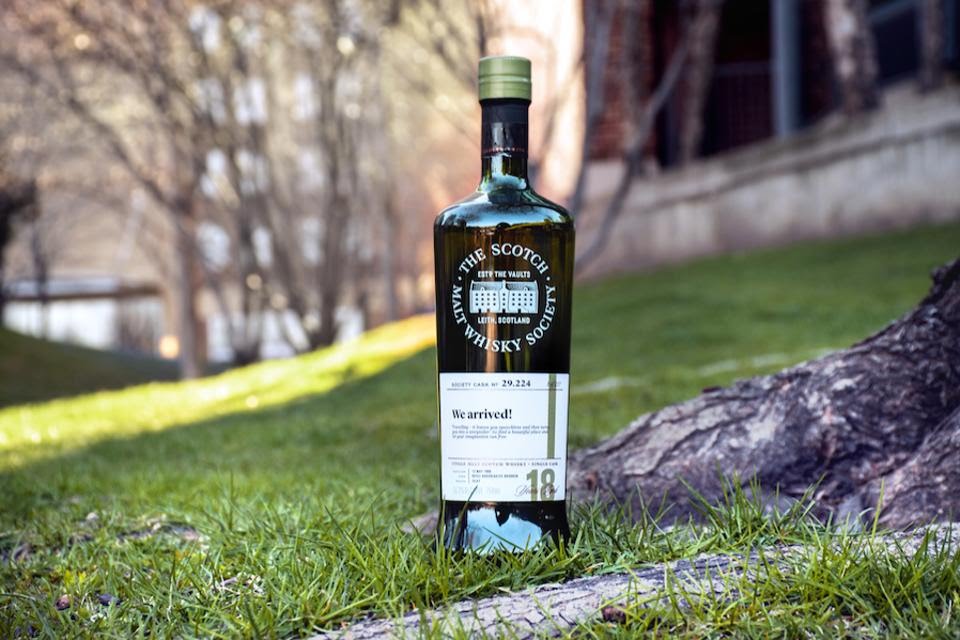 For those who aren’t familiar with the Scotch Malt Whisky Society—and full disclosure, I am a card-carrying member—the organization started in 1983 in Edinburgh, Scotland, and partners with more than 100 distilleries to release bottlings with the concept of barrel-to-glass in mind. Simply put, SMWS partners with distilleries big and small to release quality spirits that aren’t marred by marketing or advertising. You get non-chill filtered cask strength whiskies, no added coloring, no blending, no dilution. And they never name the distilleries—to keep you focused on specific flavor profiles versus preconceived notions of brands. Instead, you get whimsical names paired with non-confounding tasting notes. SMWS also has a coding system of sorts: The first number is a reference to the distillery, while the second number names the cask. (Some members, and admittedly I am one of them, try to make a sport out of decoding the numbers that correspond to the distilleries.)

And while the society started with whiskies, it has since branched out to other stellar spirits—such as Cognac, Armagnac, rum, and bourbon. (Three personal favorites: “Herby Goes Bananas,” “A Remedy for the Soul,” and “Fruity Pipe Tobacco.”) 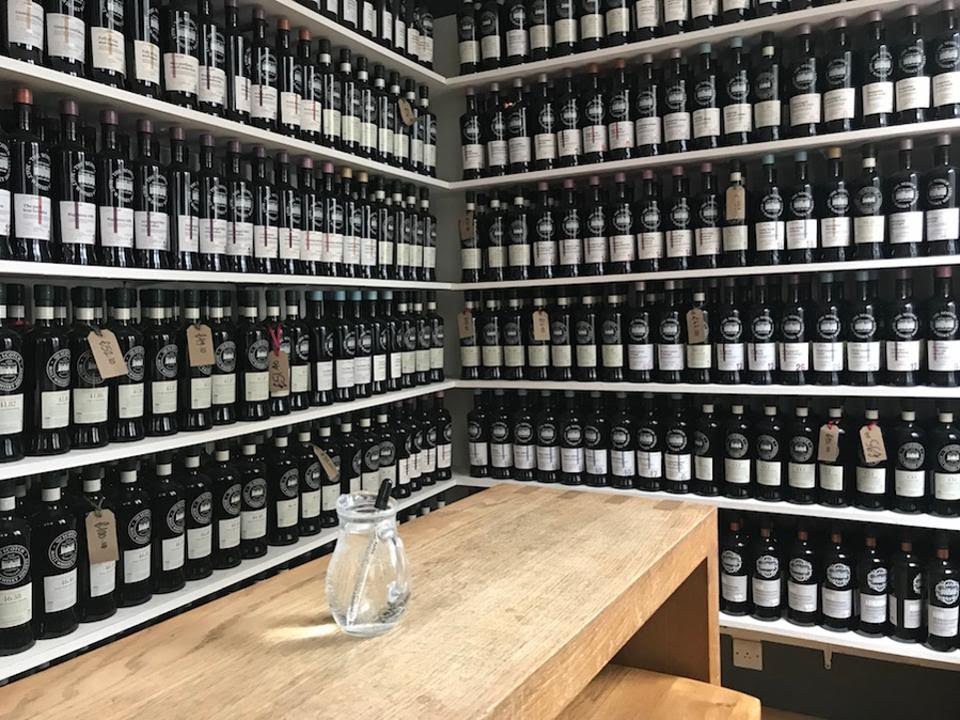 But don’t get put off by its funny or punny names—these are serious spirits. And member profiles run quite the demographic range, if my most recent visit to the SMWS Tasting Room in London’s Greville Street is any indication. Beyond the official venues in London and Edinburgh, partner bars span the world—from Hong Kong’s Safe Bubbles and Malt to Japan’s Bar Oscar to Germany’s Bar Baganyi and beyond.

And one of best things about it? It won’t cost you your retirement savings to be a member—especially for the kind of perks you get. The most expensive tier will only set you back $175. And let me tell you, if you’re a true whisky enthusiast it will pay you back in dividends.

SMWS Tasting Notes: “Whoever said ‘to travel hopefully is a better thing than to arrive’? Nosing this one neat we had gladly arrived—sea salt, seaweed, sweet shrimp scampi cooked in melted butter with garlic and sliced bell pepper over a driftwood–peat barbeque. To taste we added a glass of Manzanilla Sherry and some lemon juice to the Angel hair pasta. Water brought out the hors d’oeuvres, creamy potted lobster mousse as well as crispy seaweed thin crackers. And for that final splash we added smoked mussels to the pan and enjoyed a delightful barbeque on the beach watching the sunset. Are you there yet?” —The Scotch Malt Whisky Society’s Tasting Panel at The Vaults in Leith, Scotland 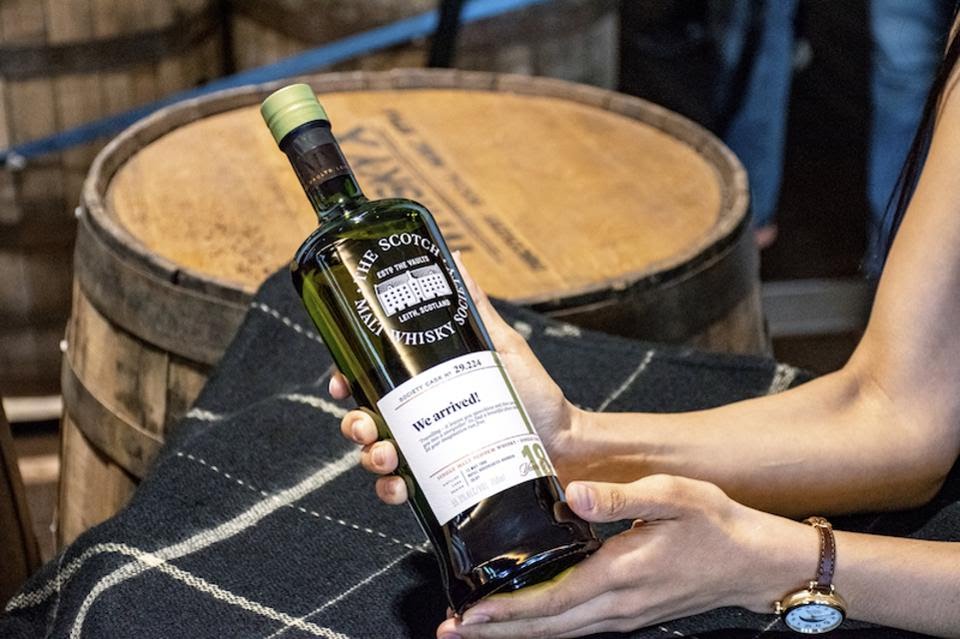 SMWS Tasting Notes: “The alluring color of orange toffee proceeded onto the nose with aromas of caramel, fudge and toffee apples, perhaps sprinkled with a light dusting of sea salt. Soft smoke drifted in with the sea air and carried with it the impression of scallops, sweet crabmeat and lobster nets tied with old nautical rope. Sea air became sea spray, dowsing the remains of a driftwood bonfire and scattering charcoal across the beach. Ginger and cloves were teasing with the idea of antiseptic antics but veered back towards cinnamon spice with caramelised brown sugar and salted honeycomb crunch. The finish embraced the maritime but with the lingering depth of dark chocolate mousse.” —The Scotch Malt Whisky Society’s Tasting Panel at The Vaults in Leith, Scotland 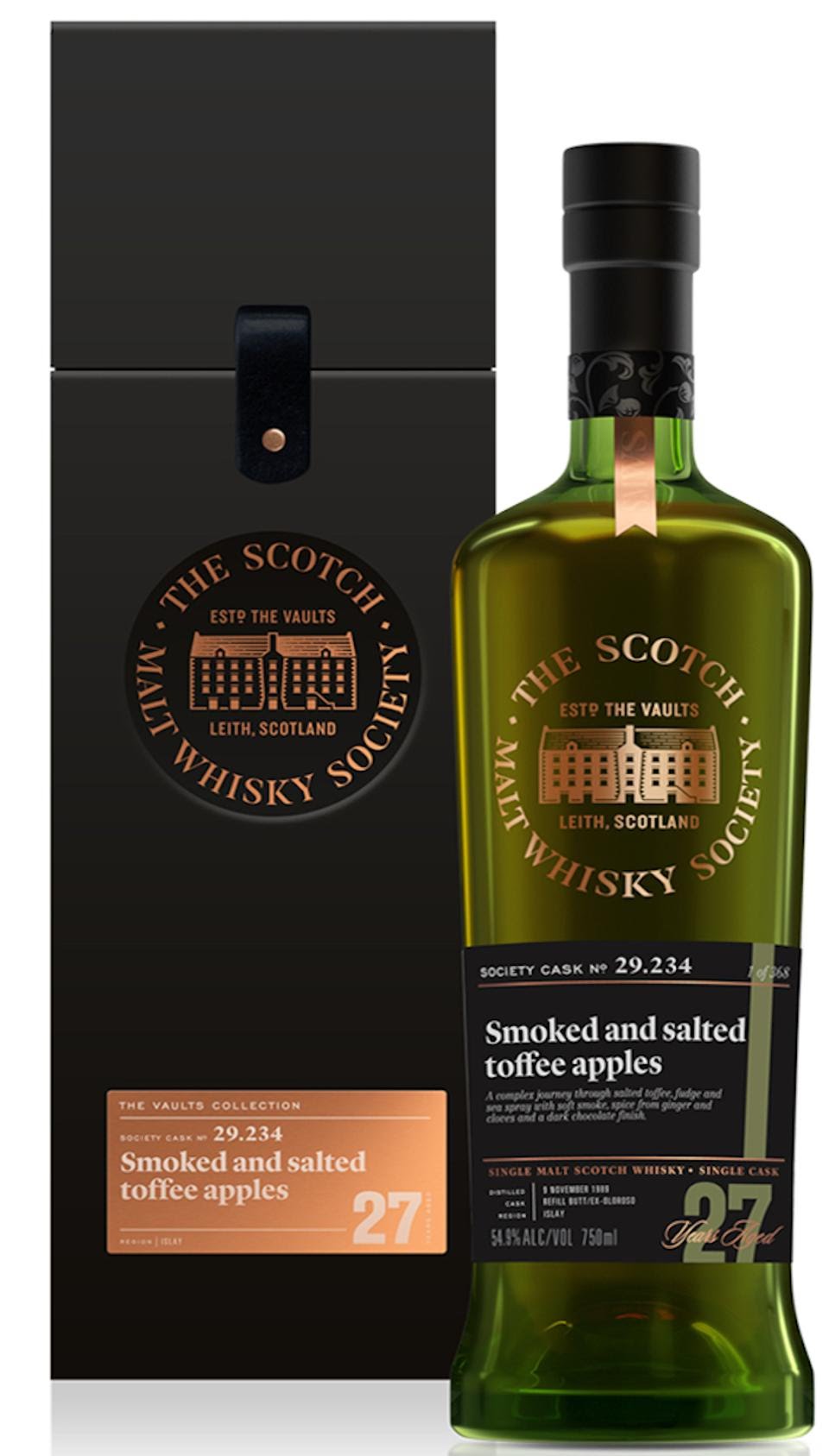 SMWS Tasting Notes: “Like cleaning out the chimney in a beehive the nose combined the syrupy nectar of runny honey with dusty clouds of black soot from the sweet smoke of burning applewood. The draw up the chimney enticed a maritime draught into the room, filling the air with a salty breeze, seaweed and the distinctly nautical nose of fishing trawlers laden with crates of crustaceans. The palate exhibited further sugary temptation as toffee apples combined with fruit sherbet sweets and smoky bacon drizzled with maple syrup. Lip-smacking and devilishly moreish, the layers of flavour continued to unravel, revealing scallops with sweet vinaigrette, smoked fish soup and the clean mineralic edge of Chablis or dry German Riesling.” —The Scotch Malt Whisky Society’s Tasting Panel at The Vaults in Leith, Scotland

SMWS Tasting Notes: “The big sherry-influenced nose carries boozy trifle, rum and raisin, Christmas cake, hoisin sauce, dark chocolate and hints of cigars. On the palate we got spotted dick, over-done Christmas cake, very dark chocolate, intense mocha, treacle toffee, and bicycle handlebar grips; one panellist was ‘dancing on the edge of a volcano.’ The reduced nose gave us coffee and walnut cake, bread and butter pudding and ‘plastic raincoats walking away from a firework display’. The reduced palate had loads of toffee, raisiny fudge, dried fruits and char-grilled Chinese ribs with a dry oloroso finish—probably challenging for some but unanimously approved by us.” —The Scotch Malt Whisky Society’s Tasting Panel at The Vaults in Leith, Scotland 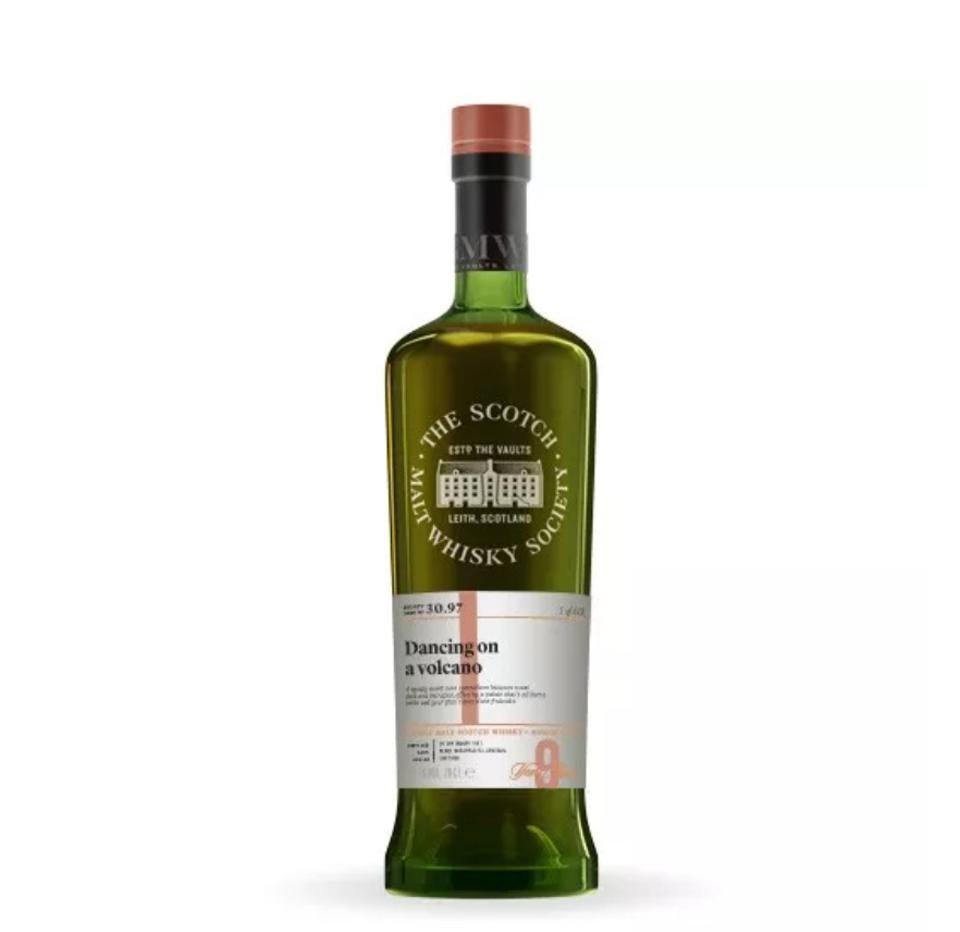 SMWS Tasting Notes: “The nose was a volcanic eruption of sweet heat like raspberry jam gurgling and bubbling on the stove. Puffs of smoke carried the alluring aromas of burning applewood and roast duck with honey-coated vegetables. A complex floral character was definitely present like heather and bog myrtle but also with lavender, thyme and rosemary. The palate continued along a path of roasted meat, perhaps venison or pork with devilishly tempting juicy crackling that had been singed to charcoal along its edges. Heavy liquorice and star anise combined with salted caramel and the dark berries of rich fruitcake but also with the citric tang of fresh grapefruit. The finish merged smoky and ashy wood with earthy herbs and the suggestion of chocolate sauce.” —The Scotch Malt Whisky Society’s Tasting Panel at The Vaults in Leith, Scotland

SMWS Tasting Notes: “The nose, mild-mannered and beautifully balanced, displayed a full spectrum of sweetness, from ripened barley to sticky toffee pudding and a box of chocolate pralines; also hints of new leather and lino cuts. The palate was deep, full of interest and attention-grabbing—intensely sweet (iced caramels, rum, and raisin ice-cream) with a kaleidoscope of orange (orange blossom, orange peel, blood orange), tropical fruits and perfumed leather. The reduced nose found sherry-soaked fruits, sherbet and tobacco, while the palate was now silky, sexy and indulgent, pulsing in the mouth with chocolate and fruit. ‘What more could you ask?’ was one panelist’s opinion.” —The Scotch Malt Whisky Society’s Tasting Panel at The Vaults in Leith, Scotland 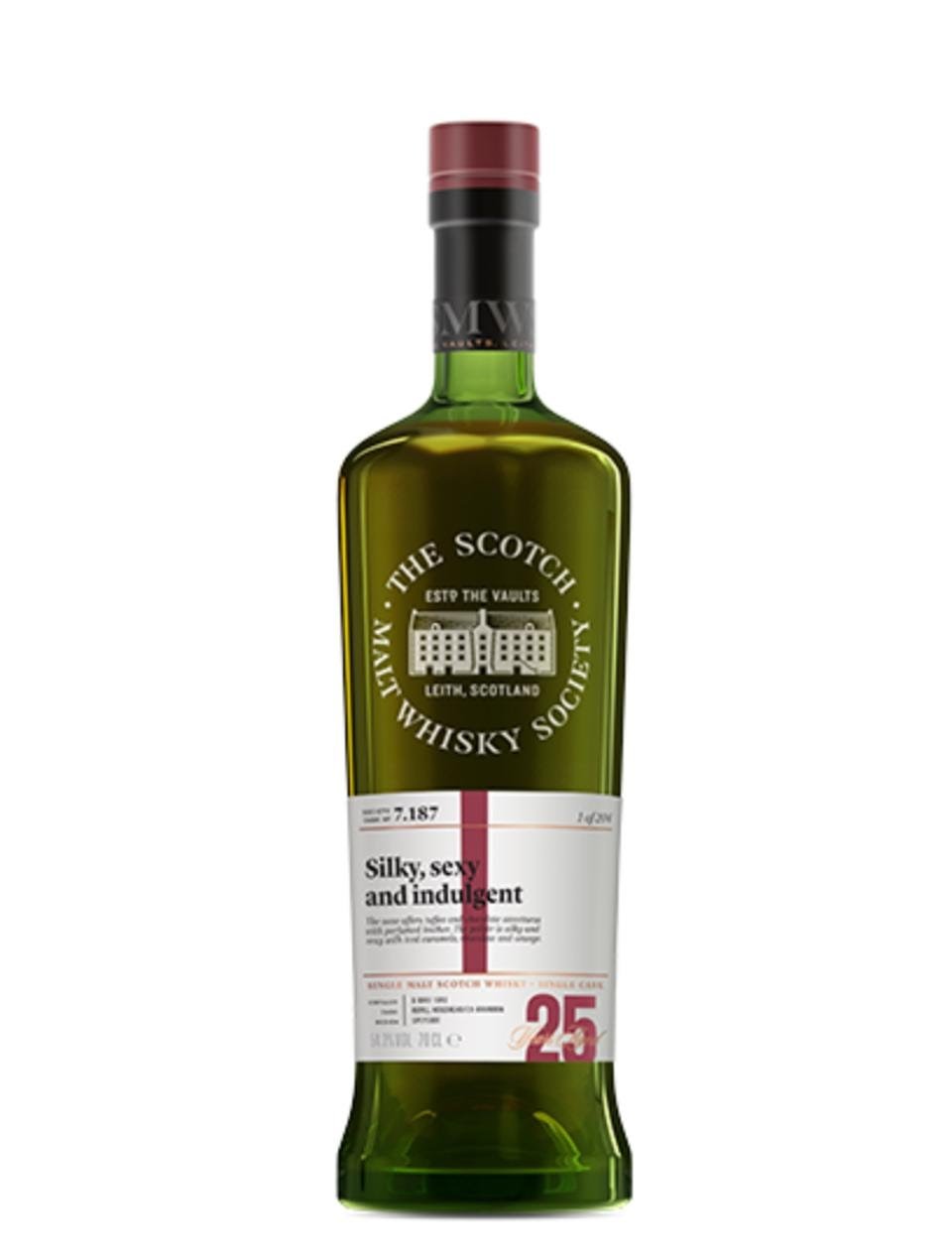 SMWS Tasting Notes: “A wooden ship is sailing through the tropics with an exotic cargo of spices, scented flowers, medjool dates and mangoes. The nose is deep, yet delicate—warming nutmeg and cinnamon spice; treacle tart and molasses; fragrant vanilla, lavender and rose with fruity splashes of cherry, mango and Madeira-soaked plums. The palate brings intense sweetness, moist ginger cake, treacle toffee, dark chocolate, marmalade and Turkish Delight, vying with tannic wood, chili spice, licorice, walnut and leather, with a dry, ashy finish. The wood and spice edge forward after adding water – without compromising the balance. Close your eyes and drift away on this sherry-soaked cruise into paradise.” —The Scotch Malt Whisky Society’s Tasting Panel at The Vaults in Leith, Scotland 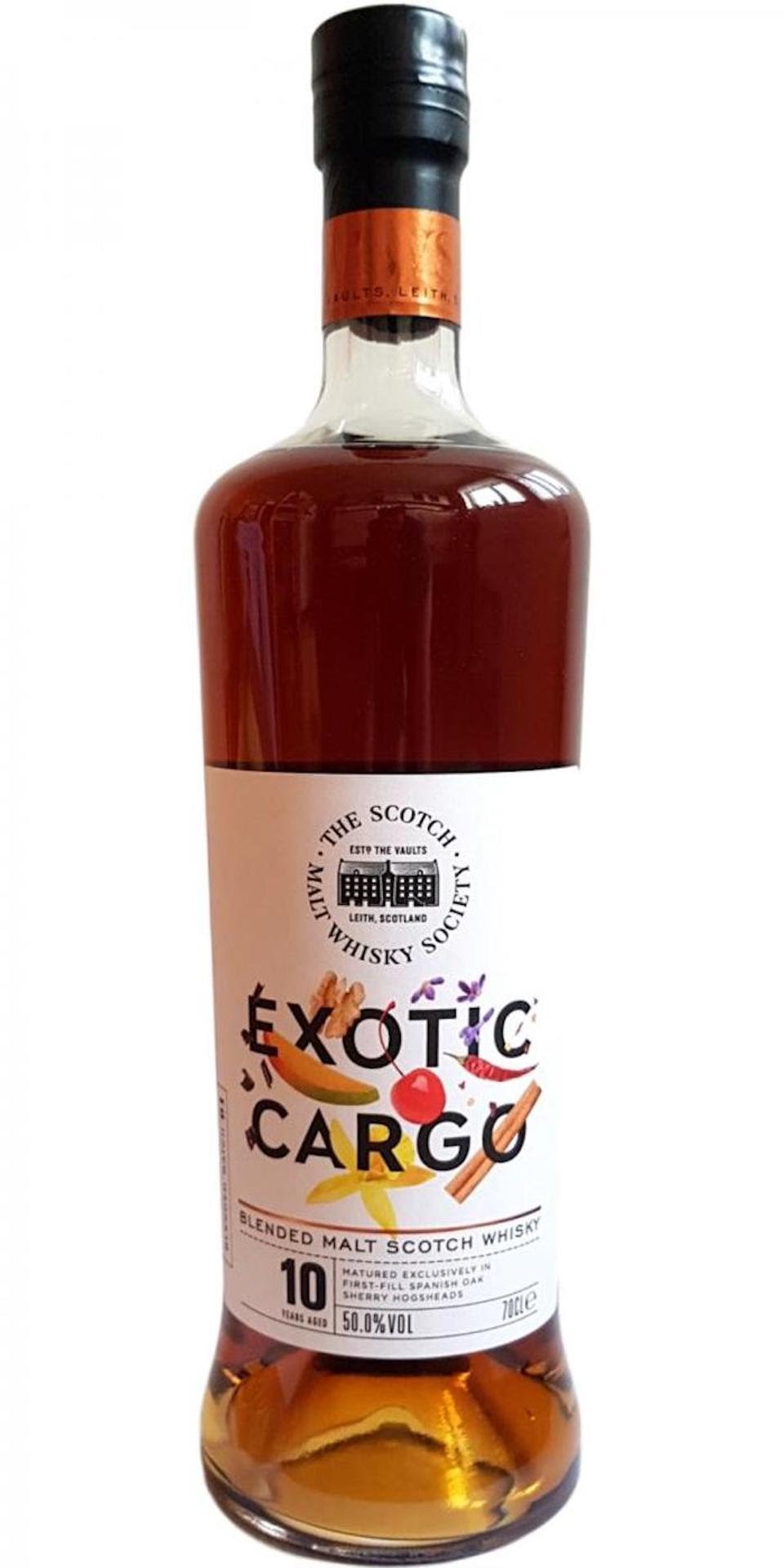 We are committed to responsible drinking.

By clicking OK you confirm that you are at least 18 years of age, the legal drinking age in Singapore.

You can revert to browsing on our Singapore website by simply closing the global website window. Thank you.